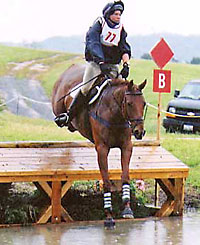 Mary and Starburst III jumping into the water at the Virginia Horse Trials: "I am wearing one of the Puffa rain jackets you gave me. My body is very dry…and everything else is very wet!"

She was winner of the inaugural Foxhall advanced horse trials, which has gone on to become one of America's premier eventing competitions. In 1999, Mary was short-listed by the United States Equestrian Team for the Pan American Games.

Her accomplishments have been featured in publications including "The Chronicle of the Horse." Mary was also recognized for her talent as recipient of a grant from the Women's Sports Foundation and an award from General Motors' "Team Behind the Team" 2000 Olympic promotion program.

Sponsorship support provided by Kerry Scott and Narrow Gate Tack has been a pivotal part of the success of these horses and Mary's riding career. 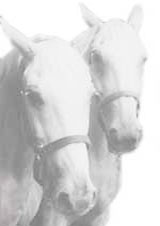